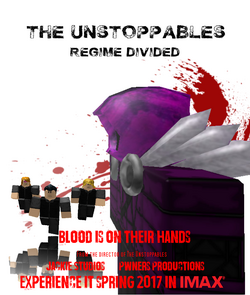 The Unstoppables 2: Regime Divided is an 2017 superhero film directed, written, and produced by Jackiepwners.

Months after Aiden's departure from the team, The Unstoppables are now part of an elite unit under the Canadian government, protecting the world from the dangers that lie. When a crucial decision is made by Prime Minister Stevenson to shut down the unit in an attempt to utilize elite new soldiers, The Unstoppables must decide between resistance or retirement. When an incident sends The Unstoppables on the run, they find themselves as targets of an elite death squadron, led by a dangerous individual.

Jackie decided to make a sequel to The Unstoppables after a 3 week break, after the release of The Unstoppables. Filming began on January 4th, 2017, and was completed and uploaded on March 22.

The Unstoppables 2: Regime Divided gained mostly positive reviews, praising the improvements and story. But some criticized the film having to be cliche, and 'not as good as the first one'.