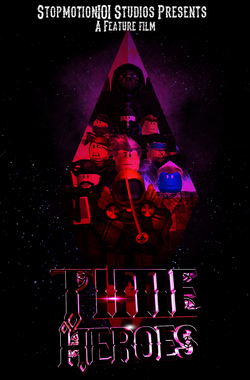 Official poster for the film.
Release Date
2018
Directed By
Endpoint
Produced By

Time Heroes is an upcoming superhero film written and directed by Endpoint and co-directed by somekiryu, AlmightyNoob, and Rick120.

Heroes from different eras gather together to fight a monstrosity.

The idea of a Time Heroes film began back as early as 2012, with the production of Moon Wars: Return of The Zombie Prince. Originally, the cast was listed to be Skull, The Dark Knight, and Hyperblue, however as Endpoint continued to make productions, he intended to involve them in Time Heroes in some way. The idea was played around with, and ever since its official announcement in 2012, the film has been in development for the past six years, with the cinematic universe being created first before the film could enter production stages and be released.

Eventually, the cinematic universe was—and currently is still being—rebooted, beginning with the production of The Renegade and Frost. It was during the production for The Renegade where Endpoint developed a long-term plan for the following films and the first draft for the Time Heroes script began being written.

Pre-production for the film began in mid-July of 2015. The film originally had Endpoint and Rick120 as the writers due to their collaboration on The Renegade but added somekiryu after he created the concept for the main villain and to strengthen character development and plot. AlmightyNoob was added to the writing staff in late-July to prevent plot inconsistencies and provide general writing assistance.

The production ran into a knot circa late 2015 and early 2016. Somekiryu voiced concerns over the number of characters that were actually on the team. He and AlmightyNoob also raised questions about Angelus's inclusion, due to the fact aliens existed within the universe and this conflicting with Genesis. Eventually, the team cut out several members, including Korin and Angelus.