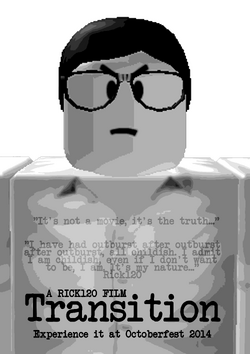 Transition is a 2014 autobiography film, directed and written by Rick120. The film follows Rick as he tries to cope with several difficult incidents during the production of Dream Clouds. The film was released on October 15, 2014 at Octoberfest 2014.

The film covers the real life events of Rick120 (the film's director) during the production of Dream Clouds, from February to June 2014, where he goes through several difficult situations. and ultimately begins to lose himself in the process.

The film was made in complete secrecy from other people. Production began on October 9, 2014 and ending on October 14. No actors were used in the production, Rick instead opted to use models and himself as an actor.

Rick announced the movie at the 2014 Octoberfest on October 14th, the last day of production. He stated that the film is an autobiography about him during the stressful days during the making of currently canned project Dream Clouds.

Rick stated at the event: "I don't care about the reviews, I simply want people to understand me a little bit more, that is the sole purpose of this production- it's not a movie, it's the truth!"

The movie received an overwhelmingly positive reception, with praises going to the soundtrack, the color correction, use of archive footage and the style in which the film was made. The film recieved minor criticism for some editing errors.

At the time of release, it was Rick120's highest rated film and most critically acclaimed.