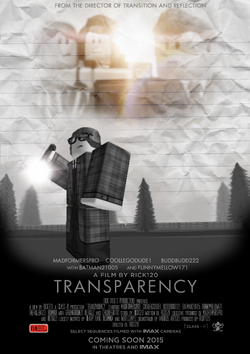 Transparency is a 2015 British-American Crime film, written and directed by Rick120. The film follows a fictional crime case, which had a few inspirations from a number of, both real life and other fictional cases, such as Jack the Ripper and The Origami Killer from Heavy Rain.

Detective Harris Godfrey's past comes back to haunt him when he's called to a quiet countryside town to investigate the deaths of two civilians, suspected to be as part of a century-old spree of killings of, who is only described as 'The Phantom Killer'.

The film was announced on Twitter on May 28, 2015 after Rick decided that he would hold off on Dream Clouds Reboot, mainly due to the lack of original content in the community. But also to let him try his hand at making a crime movie, being both; a fan of the genre and having an interest in crime and investigation stories- whether being a real event or fiction.

On May 29, Rick released the teaser poster and the official main cast of the film, a new poster for the film was released on July 9 and filming begun shortly after and is expected to last until around mid to end of August.

On July 24, the film's certification had been raised to an I-18 due to the graphic violence depicted in the film. Filming wrapped on August 22, and editing was completed on August 24, 2015 with a premiere planned for the following evening. On August 25, 2015, the film was released.