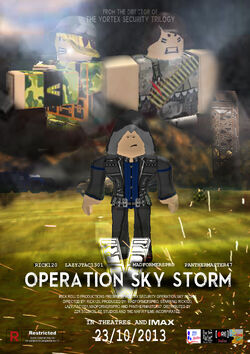 Vortex Security: Operation Sky Storm (also known as: VS: Operation Sky Storm) is a 2013 British-American Action film written and directed by Rick120. The film serves as a prequel to Vortex Security: War of the Raiders, and features several main characters from the original trilogy. The film deivates from the action side of the film in favor of character development for the first time in the series. The film was released on September 1, 2013.

While tracking Israeli smugglers on a weapons-bust operation, a young Richard Talvovski tips off Vortex Security to a highly funded terrorist group known as the Saxon Daggers. However, knowledge of things puts Rick in the program's center of attention, which reopens the doors to the one of the most tragic operations, in the program's history.

On March 24, 2013, Rick120 pitched his ideas to his fellow ROBLOXian film makers via Skype call for two prequels to his Vortex Security trilogy, believing the characters need a bit more development and focus; and should it happen that's where the focus needs to be.  On the next day, Rick announced that the first prequel entitled Vortex Security: Operation Sky Storm, was on the way, originally slated for release on August 23, 2013.

Rick's confirmation will begin as far back as ten years before War of the Raiders.  The film's logo was released the same day as was the first look at Rick's character during his teenage years in Israel. Over the following few months, Rick released three posters for the film. On August 5, 2013; Rick120 confirmed the movie will be Rated R for strong combat violence, bloody injury and thematic elements.

Filming began on July 9, 2013 and continued until July 21 when a break from filming happened. It resumed on August 8 and was expected to continue until August 20, however due to health problems with the director, filming was put on hold. Filming finally recommenced on August 27, and ended 3 days later.

On August 13, 2013, Rick120 confirmed the movie had passed the half-way mark and things are beginning to speed up smoothly to the films completion. Rick stated that Operation Sky Storm shall land on-time, as planned. However on August 14, Rick fell ill and was unable to have the film finished on-time. The film was released on September 1, 2013.

The movie's premiere took place on September 1, 2013 , with both director Rick120, and co-director Madformerspro in attendance, as well as most of the film's cast. ThecapcomFreak attended for a short amount, before leaving shortly before the screening of Operation Sky Storm. The premiere marked the grand opening of the ROBLOXiwood Royal IMAX Theatre.

The movie has received positive reception. Viewers generally praised the character development, action, dialogue and emotional sequences as well as Madformerspro's portrayal as Mikeal Saxon. However, some criticism lay with the editing, storyline and it's unecessary violence to give the film it's R rating.

The film went on to win the Best Picture award at the 2013 Octoberfest Film Festival.

On March 25, 2013, Rick120 announced Vortex Security: The Common Enemy would be the sequel to the film. In August 2014, the film went into production-hell.

The Cast being photographed at the Premiere. Rick120 stands in the middle.