Vortex Security: War of the Raiders 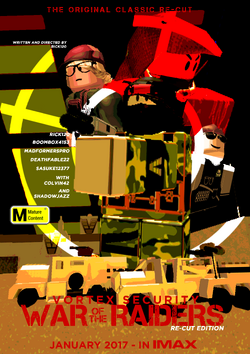 A Re-cut version of the film, is due for release sometime in January 2017.

The plot follows Rick as he goes on an adventure to Coral Island to make sure that his old friend, Adamrox, is safe.

The film was distributed by Rick Roll'd Productions and the film was also released in six parts from January 8, 2011 to March 9, 2011. At Octoberfest in 2016- after the announcement of VSV: Division Ghost, Rick confirmed that he would be remastering the original four films.

In 2013, Vortex Security: Operation Sky Storm, the prequel was released.