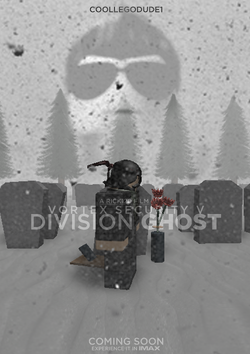 Vortex Security V: Division is an upcoming military thriller film written and directed by Rick120. The film will be the fifth and final installment in The Vortex Security Saga.

It was planned for release in December 2017, but was delayed to a currently unknown date.

After the completion of Operation Sky Storm, Rick took a long hiatus from Vortex Security movies, to focus on more original works. On more than one occasion, he had been planning on developing a VS-based film, originally a sequel The Common Enemy was in the works, however frequent production delays and scripting disagreements caused the project to be dropped.

In September 2016, upon releasing a video- commemorating the 5th Anniversary of the franchise, a fifth film was officially confirmed. The production was unveiled as Vortex Security V: Division Ghost, with Coollegodude1 down as the main lead.

In October 2016, during Octoberfest, small details about the film were released- including the announcment of Ultrazz, as the films main antagonist.

The film's script was complete in March 2017, with filming originally planned to begin during summer before it was delayed. On March 25, the film's release estimation was removed, indicating a delayed release.