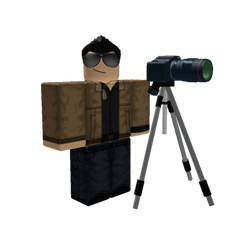 Wholesaleryan56 is an American actor, director, and writer.

Wholesaleryan56 joined ROBLOX on January 9, 2010. Four years later, after watching Moon Wars: Zombie Planet, Whole was inspired to become an actor and desired to become apart of Stopmotion101 Studios. After meeting Endpoint, he joined the studio. As time progressed, Whole quickly became a leading actor in the studio, and rose to become one of the central representatives of the company alongside Juzzy4, and a trusted friend of Endpoint.

After this, he went on to join several ROBLOXiwood companies, starting him off on his path. Inspired by the works of somekiryu and Endpoint, Whole would decide to pursue a career as a director, beginning work on his debut film, Hostage.

When the original Robloxiwood shut down, Whole founded the RFMC Wikia alongside █████████████ and OpticalRift.

Whole released the original cut of Hostage on January 26, 2018, technically being his first film.

He now acts as a director under ROBLOXiwood.