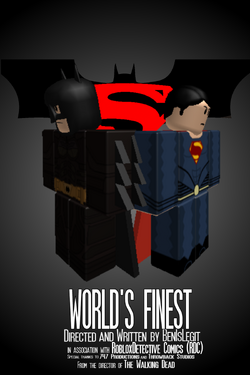 World's Finest is a cancelled 2014 American superhero film written and directed by BenIsLegit and also co-directed by Routess. The film was to be co-produced by RobloxDC Studios. The film is based on the DC Comic characters Batman and Superman. It is the final film in the Superman/Batman Trilogy.

Clark has been following Zod's attack on the world. Adjusting to his new life working at the Daily Planet and as the new superhero, Superman, a team of super-powered anti-heroes called "The Elite" shows up. Clark is forced to team-up with a force that even the Man of Steel may feel threatened by...The Batman.

In 2013, BenIsLegit planned and began creating a Superman/Batman film after his concerns with the upcoming Batman v Superman: Dawn of Justice film, and decided to make a ROBLOX adaptation of his idea of what the film should resemble.

On November 5, 2013, Ben entered RobloxDC and agreed to have Popsfootloose949 co-direct World's Finest with him. Later on, MisterThrowback and Moses747 requested to scriptwrite for the film. It was planned that after World's Finest, a new series called The Continued Adventures of Batman and Superman would be created, and that the film would be a stepping stone to a Justice League film. After a falling out, Ben kicked Pops from the co-directing position and broke the film off of RobloxDC.

In early 2014, The Mafia Films seized control of RobloxDC and made negotiations to bring in BenIsLegit and World's Finest back into RDC. Production continued on the film until in May 2014, being around 50 minutes completed. Soon after, TMF fired BenIsLegit from the film for using 1.0 bodies instead of 2.0. The reasoning behind it was that the characters "Weren't realistic enough." Ben then decided to cancel the film and never released the footage. The project remained in limbo until a surprise announcement on June 11 that CosimoValuta agreed to write and direct the film, with TMF distributing and RDC co-producing. The following day, it was revealed the film would take after the DC graphic novel "The Dark Knight Returns" and planned to keep MisterThrowback on board to co-write and keep a couple of the same cast members, while bringing on TMF regulars.

On July 18, CosimoValuta dropped the project and handed it to Routess. On July 21, during filming for Routess Batman film, BenIsLegit asked Routess if he could make World Finest and he said yes. By this, the film went back to BenIsLegit. However, on July 30th, Ben said that he would be quitting ROBLOX and filmmaking. The film is now effectively cancelled and the footage is still lost to this day.

The previous two films in the Superman/Batman trilogy are Superman and Batman.